Videos come in many shapes and sizes, from a simple iPhone video to all the way up to major Bollywood/Hollywood films. For most videos, there are too many moving parts to leave your process to chance.

Anytime a company in this industry is going to produce a video, they will need to undergo a three-step process with any of the available media & entertainment solutions. 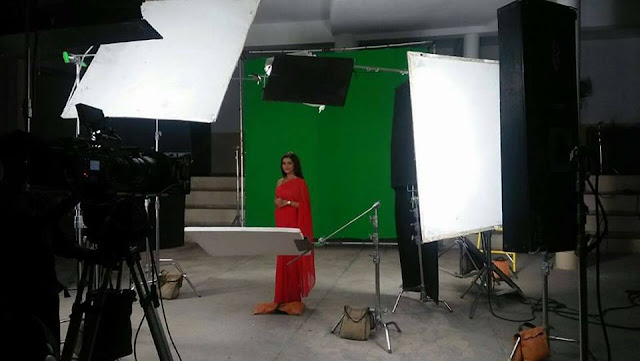 What is video production?

Having said that, it takes the same amount of work, sweat, and hard work for 1 min video as it will be for 1-hour video… the simple reason behind this is the video production process.

The process of creating a video from concept to completion consists of four phases: Pre-Production, Production, Post-Production, and Final Delivery. 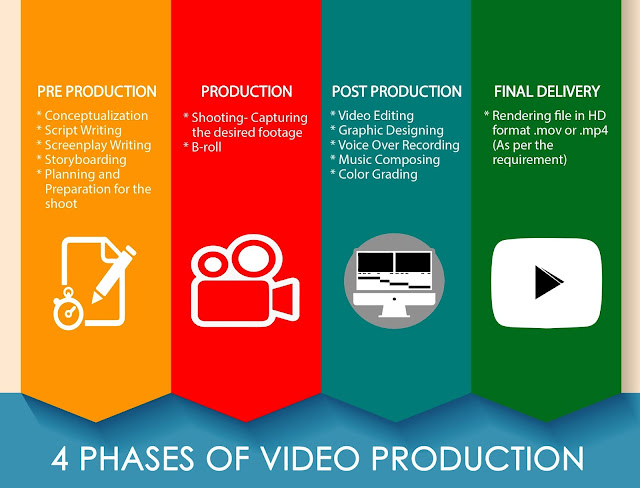 
There are some basic building blocks that are common among successful video producers. However, the video production process may vary based on the style, content, timeline, effort, and budget

Phase One of the Video Production Process is Pre-Production

The first step in the process of creating a video is all about preparation and setting the groundwork or you can say a base/blueprint for your video. During this phase, it's essential to do the planning, research, coordination, problem-solving, and organization necessary to set your video project up to be successful.

It's important to conduct a series of meetings, in order to identify and finalize all of these elements. Again, this process will vary based on the team and the scope of your project, but here are some basics to help you get started.

Fact-Finding: If you are planning to work with an external video production company like Kraction Films, this is the part of the process where you'll want to communicate things like branding, target audience, and the tone and feel for the piece.

Bring your company stakeholders and video production team together to discuss the purpose, strategy, and goals for your video and how it will be used after it is finalized. You also need to brainstorm on the target audience for your video. Also, you must be absolutely clear on the INTENTION or OBJECTIVE behind creating the video in the first place. The message that needs to be communicated through the video is very important. These things act like a spine for your video.

Pre-Production Meeting: This meeting is typically held between your video producer and the primary point person for the project. Make sure to set the timeline, identify the characters, and finalize any location details. This meeting can be done over the phone or in person.

Site Visit or Reece (Optional): Depending on the complexity of the shoot, it can be helpful to do a site visit to your location, especially if neither the producer or director/cinematographer has seen it.

Shoot Preparation: Prior to showing up on-site for your video shoot, your video producer should ensure that scripts have been reviewed and approved, interview questions discussed, characters are vetted, a schedule is finalized and locations are confirmed. All these details will help ensure that the production phase goes smoothly.

Phase Two of the video production process is Shooting, aka Production

The meetings are over, the preparation is complete. Now, it's time to have some fun! The production phase is where you capture all the interviews and footage for your video. This is the part where the story begins to come to life.

The production phase is where all the raw materials for your video will be captured. If you have specific visions, ideas, or visuals that you want to be included in the final product, be sure that you have clearly communicated that with your producer before the end of the production phase. 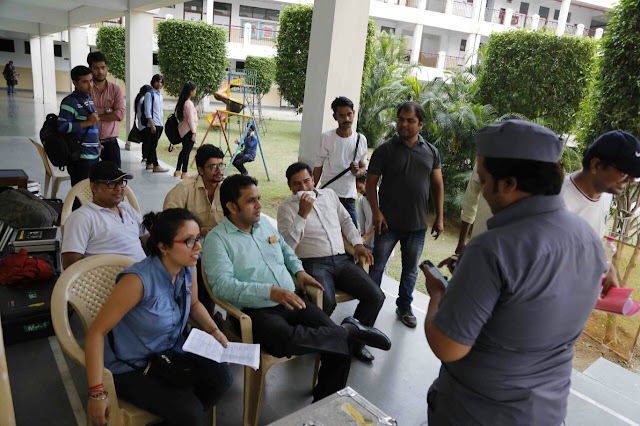 Your producer will carefully review all the footage and transcribe all of the interviews conducted. Then, they will assemble the story and the video editor does their magic to bring all the pieces together. 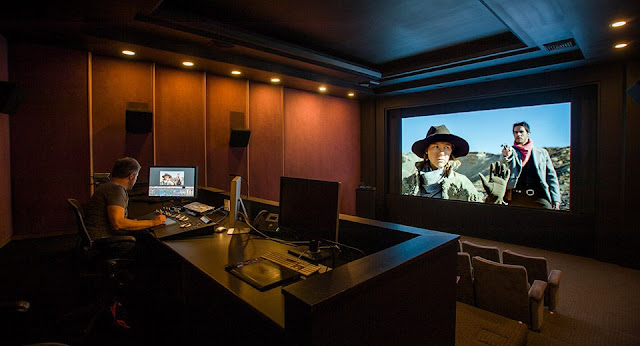 Your video production team will handle all the nuts and bolts of making your project come to life. So, just sit tight and wait for the magic to happen. This process takes some time and creativity, so don't expect that it will happen overnight.

Every production company will have different timelines for the post-production phase, but you can plan for it to take approximately 6-8 weeks unless you've discussed another plan with your company.

Note: if you are looking for a project with a shorter turnaround time, be sure to mention that to your video team. Many companies have the ability to work within your timeline if you make that clear from the beginning of the project.

Once your video team has created a draft of the video project, it'll be time for your project point person and key stakeholders to step back into the mix:

Initial approval and revisions: Once the initial version of the video is edited, it's time to review the work. Assuming there are some changes that need to be made, the revision process can begin. If you are working with a video company, there may be a predefined number of revisions or hours set aside for revisions.

Final Delivery: Once the video is finalized and approved, it's time to export the video to its final format. If you are planning to use the video on a specific platform (or platforms) be sure to communicate that with your video team. All platforms (YouTube, Facebook, etc) have slightly different specifications for optimal video playback.

Why is a video production process important?


Dependability: Whether you're shooting on location, in a studio, at your office, or at a friend's home, there are a lot of moving pieces that have to come together. Does the time and place work for all members of the crew? How about actors or spokespeople? Identifying all of these details is crucial, and it is essential to do it in a logical, systematic fashion.

Predictable Timeline:  Video production takes time. For anything more than an iPhone video, you don't just pick up a camera one day and have a video in your hands the next. So, how much planning time do you need before the shoot and how much editing time afterward? It's only guesswork unless you have a real process. An established and tested video process can help you go from an educated guess to an accurate prediction.

Accurate Pricing: Speaking of pricing, most production rates are based on time. The more hours required to plan, shoot, and edit the project, the more it costs. And when you add extra days or crew members, that obviously adds to the total time (and price).

Fewer Revisions:  When you nail down your objectives, discuss the details in pre-production, and then execute to match your vision, you shouldn't end up with many revisions at the end of your project. On the other hand, if you go through that whole project without a real process, you may end up with problems that require extra editing and time to resolve.

Different production companies and videographers may have different processes, but the bottom line is that process allows video teams to have a predictable pace, dependable results, ensures quality and accountability.

At Kraction Films, our process is very organic and we try our best to create an authentic look and feel which can connect well with the audiences.

What are the types of videos available with Kraction Films? 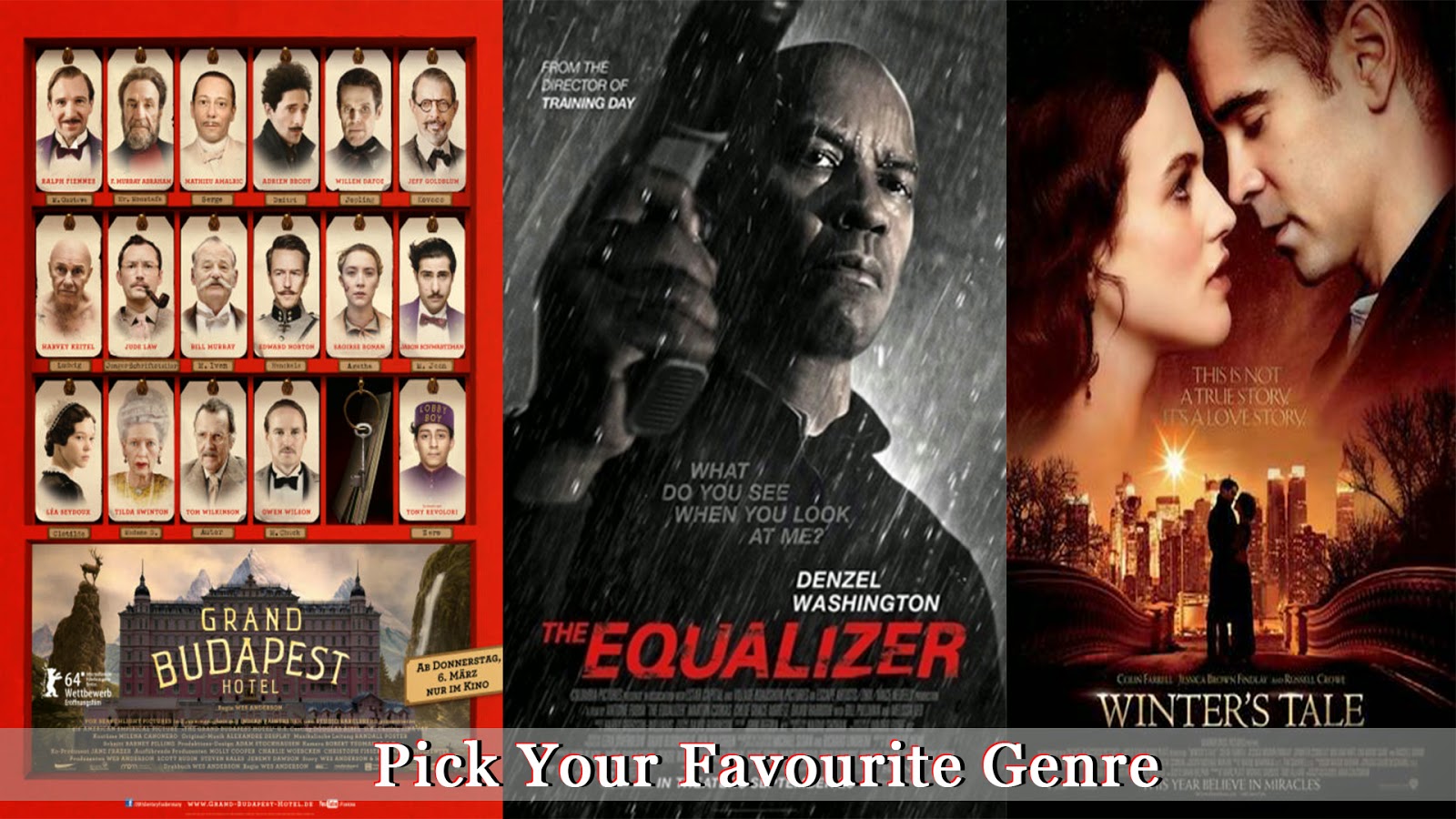 1. What’s Your Favourite Genre- First and foremost everyone prefers to watch a movie which is of some interests. Today film industry caters films which have many shades of life in a 2 hour film. Those who are inclined towards suspense thriller they may go for Gone Girl, The Equalizer or may be Shutter Island. People who wish to go out just for entertainment they may go for comedy movies like The Grand Budapest Hotel, Dumb and Dumber To etc.  2. Read The Reviews- Read your movie’s review in more than one web portals or newspapers. imdb.com is your best buddy when it comes to movie review. 3. Grab Your News Diet- Keep yourself updated about all the progress and development the film is making in the market. Grab all the news which is related to the movie you are planning to watch. Box Office Reviews are must. 4. Listen To The Music Track- It’s better to listen to some of the music track, if any, the film is holding in its name. This will help you stay conne
Read more 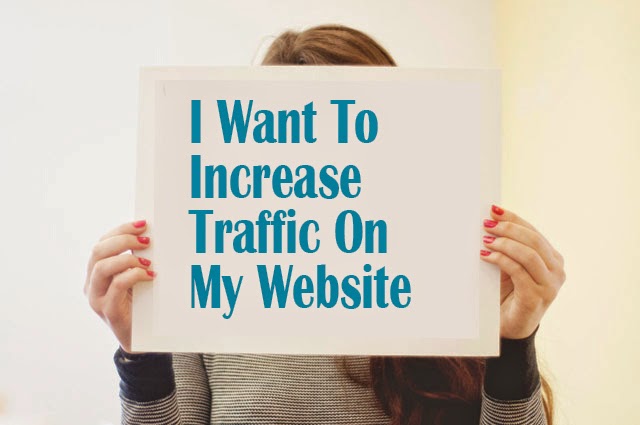 Solutions: I Want To Increase Traffic On My Website Building good and consistent traffic on your website or on your social media portal is not that tough as it seems. Here are the basic steps that you can take to increase traffic on your website. Offer Quality Content On Your Site:  These days people are fond of reading interesting articles and things that can be  useful for them. Brain storm on what your target audience wants to know about the most. This can be any form of entertainment or  solution to their problems. Keep Updating Your Website:  It has been noticed that people tend to visit those website which quenches their audiences  every time they visit the site. Add fresh content every few days if possible; at a minimum, weekly. Add Videos At Your Landing Page:  Video and images capture our sense at much faster rate than text heavy article. So, why not using  them to attract your audience. Share Your Updates On Social Networking Sites:  Channelise every bit of yo
Read more 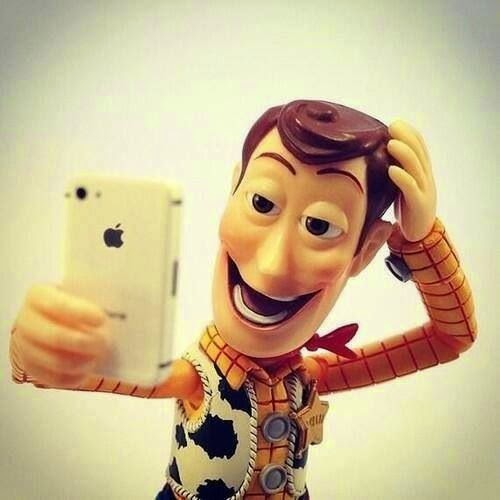 Selfie Fever Time To Talk About Some Tips And Techniques These days people are bit obsessed for taking Selfie or self portraits. What is the tough part in selfie is to come up with new ideas. Selfie Fever Tip #1: The problem that usually comes up while taking a selfie is of focus. So, why not place someone or some object on the place where you want your to focus. Height doesn't matter so much as distance, but try to match it to yourself as best as you can for accuracy. Tip #2: Try standing by the corner of the wall or the building. This will give you two benefits in one go. First, you will get the best focus for yourself. And second, you will get a decent amount of depth of field. Tip #3: Use props to express your personality or emotions. This will give you added advantage to be at ease and express naturally. Sample Image Tip #4: Self timer is the best option for selfie. Place your camera on table or on any shelf and express your heart out in your clicks.
Read more